Savelletri is one of the two sea hamlets in the municipality of Fasano, it is 5 kilometres far from the city. The coast is characterized by rocks and small bays with sand.

It originated from an ancient fishermen’s village but nowadays it is one of the most appreciated destinations for the vacation. Here there are two ports: the smaller one destined to the fishing boats and the bigger one, recently built for docking larger boats.

Close to the bigger port there is a small church dedicated to San Francesco da Paola (Saint Francis of Paola) who is venerated with a procession of boats in August. It was built at the end of 1800 wanted by Mr Amati. It presents a tufo (local stone) external façade and one room inside. In 1973 a new and bigger church was built thanks also to the donations of the inhabitants, it shows a more modern style.

Along the coast, in direction Capitolo, there are some ancient buildings called “Case Bianche” (white houses) so named because of the colour of their walls, once they were fishermen’s houses built on the rocks very close to the sea; going ahead, on the left side of the way there is the Archaeological Park of Egnazia. 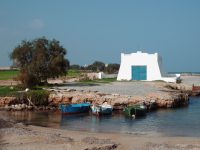 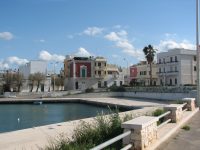